I've tried to make nail polish with eyeshadow multiple times before, but it always ends up clumpy!
I know, I know, the solution to that is to add polish thinner, but I don't own any! lol

After not trying this for awhile, I decided to give it a try again.
I used an eyeshadow palette by Profusion that I got from Ross for around $6 that I never use.
They're all shimmery shades, and there are some beautiful shades, but the eyeshadow really stinks! lol I just don't like it, and the the colors are sort of hard to blend.

So I scraped some powder loose and mixed it with clear polish and stirred, and here's what I got: 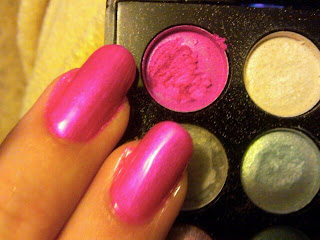 This is the franken polish next to the original eyeshadow. You can see the purple duochrome from the eyeshadow actually translated onto the nails- I was excited for that!
But, it was pretty clumpy. 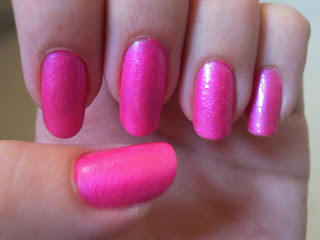 Here's a better picture of the nails, and all their clumpy glory!
Apparently this color is very similar to an Orly polish and, it's almost identical to the new breast cancer OPI Pink Shatter.
So after having this on my nails, I picked up a gold crackle polish by Color Club at Rue 21 for $4. I threw it over my pink nails, and this is how it looked: 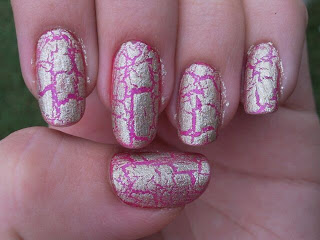 The Color Club crackle was very hard to work with, as it all clumped up in the top of the bottle as I was trying to use it, but it did have good results. I saw online that Color Club's gold crackle actually has a name- "Tattered in Gold," but my bottle is unnamed. (Because it's from Rue21?)
So then I tried to franken a second polish, with the same palette.
Since I Had such a clumpy mess the first time, I tried adding some nail polish remover to my franken to thin it out, but that just made the polish dry really weird- and it was still clumpy.
So, I just threw the gold crackle(shatter? whichever.) over it! 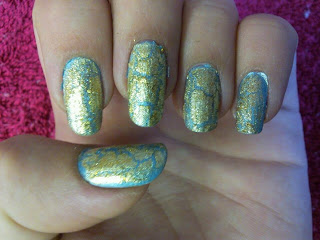 Have you tried making your own polishes before?
The palette I have is pretty large, so maybe I'll finally get some polish thinner so I can try out all the pretty colors on my nails, that don't work so well on my eyes.
P.S.
-It has been raining here for the past 4 or 5 days, and it's not supposed to stop for another 3 or so days. So gloomy!
-Starting this week, I have to get up for work 3 times a week at 5:30 am. It's like school all over again, but hey! that's life!
Happy polishing!
-Posh
at 10:01 PM

Pretty and perfect due to your steady hand.
Apply that lipgloss like it's your job.